Some films just seem to be made for adapting to a live performance onstage. The characters are strong and sympathetic, the story is emotionally powerful and the music is amazing. Disney’s Frozen has it all. Which is why it has inspired a brand-new live stage spectacular—Frozen—Live at the Hyperion which debuts this May at the Hyperion Theater in Disney California Adventure® Park at the Disneyland® Resort.

“We knew if we were going to create a new live musical at a Disney Theme Park, it would simply have to be Frozen,” says Dana Harrel, Creative Portfolio Executive at Walt Disney Imagineering.

“Live theater amplifies and intensifies your emotions because you are watching the performers bring the story and songs to life right in front of you.”

But adapting the film for the stage required careful—and very creative—thinking. “There are things you can do cinematically—such as character close ups or sweeping scenery shots—that you can’t do onstage,” Harrel explains. You also can’t replicate howling blizzards or a towering ice palace that appears from thin air.

That’s okay, though, according to Harrel. “Our goal wasn’t to replicate every moment of the film, but to find and honor the essence of this beautiful story about the love between two sisters by telling it in the strongest, most emotional way possible. We also wanted to immerse the audience in their world,” she says. “A live stage musical has the power to do that.”

“Finding the right talent was crucial. Live theater amplifies and intensifies your emotions because you are watching the performers bring the story and songs to life right in front of you,” says Harrell.

One of the key strengths of Frozen is the music, Harrel believes. “There are so many great songs,” she says. “But except for the opening ice cutting sequence and the ‘Fixer Upper’ song in the film, most of the songs are either duets or solos. So we expanded several of them to become ensemble music moments, which every show needs. We also created a new grand finale.”

To find the right talent, Harrel and her team scoured the country. “These are very demanding roles,” she says. “And with up to five performances a day, we needed multiple actors for each role. But they had to be actors who could get to the core of these characters and their complex emotions.”

“I want to create something as immersive and exciting as the attractions at the Park. I want the Guests to experience this show as if it were a theatrical thrill ride.”

“Finding actors to play Elsa was the key to our success,” Harrel says. “In the film, Elsa is very poised and controlled. It’s Anna who goes on the adventure to find Elsa.” Harrel explains, “Elsa hides in her ice castle and in herself and her emotions. We needed actors who could not only handle that acting challenge but also sing ‘Let It Go’—which is not an easy song—while standing on a staircase in mid-air.”

Olaf was another character who required a very unique skill set. “Olaf is an actor manipulating a puppet, so we needed performers who could do puppetry, dance, sing and hit that high note at the end of ‘In Summer,’” Harrel says. No easy task.

But how do you handle such spectacular scenes as swirling blizzards like the moment Elsa creates her towering, glistening ice palace? According to Harrel the answer is that you don’t try to replicate them as they are seen in the film. Instead you find ways to theatricalize them. And that is just what Broadway director, Liesl Tommy, did. 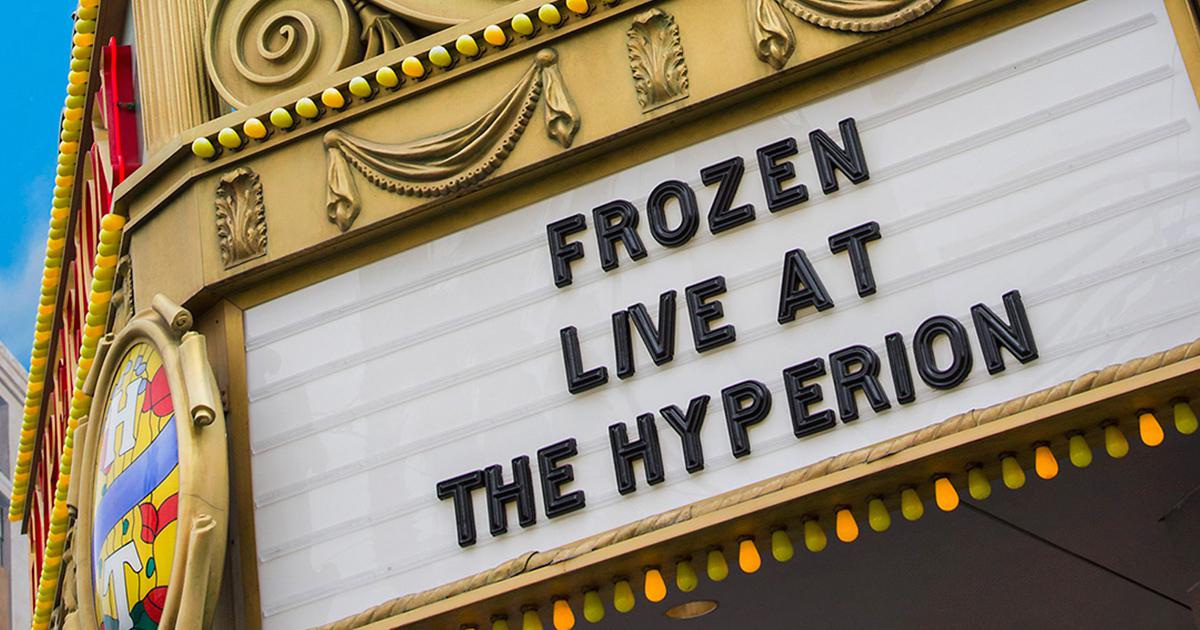 So from the moment the music begins, audiences will find themselves drawn into and even surrounded by the world of Frozen. Stunning projections paint a palette of colorful effects on every side. A giant staircase rises from the stage floor, pushing out over the first four rows of the theater, and an enormous crystal chandelier sparkles overhead. But because we don’t want to diminish the impact of what you’ll see, we want to keep some of the details a surprise. Let’s just say that amazing things happen on the stage, above you and all around you.

“Disney is the number one entertainment company in the world,” Harrel says. “We give our Guests such a wide array of different kinds of entertainment including live performances. With Frozen—Live at the Hyperion, we’re providing a taste of top-quality live entertainment. For some Guests it will be their first experience of a Broadway-style musical. Everyone involved in Frozen—Live at the Hyperion wanted to push the envelope on what we could do to make that experience truly special. I can’t wait to see how audiences respond.”

To keep the magic of Frozen going long after the show ends, wander over to Elias & Company where you’ll find a selection of Frozen merchandise such as dolls, toys, plush, apparel and more. Disney Visa® Cardmembers, be sure to take advantage of your Cardmember savings of 10% on select merchandise purchases of $50 or more.12 Want to make every purchase sparkle while you earn Disney Dream Reward Dollars®?3 Check out our Frozen card design and find out how you can switch from your current card to this “cool” design today.4

Here’s everything you need to know about dining options at EPCOT®.

Discover memorable ways to make the most of winter with your family in Disney style.