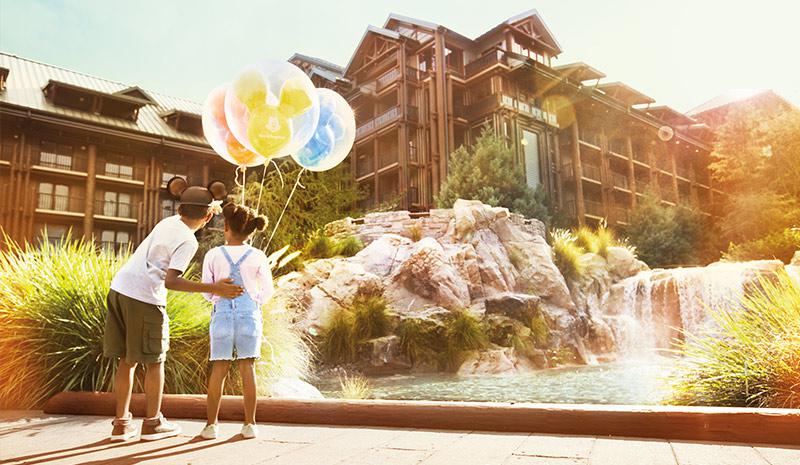 When Disney Vacation Club® first welcomed its Members “home” in 1991, its flexible approach to vacation ownership pioneered a new way to vacation with “the Mouse.” Disney offered families the comfort of spacious, homelike accommodations and the ability to customize each trip to meet their changing needs over decades of ownership.

Now, more than 25 years later, Disney Vacation Club is blazing another timbered trail, venturing back into the woods to create a new frontier for family vacations.

Copper Creek Villas & Cabins at Disney’s Wilderness Lodge (scheduled to open July 2017) will be the 14th Disney Vacation Club Resort worldwide, the 10th at Walt Disney World® Resort and the second at Disney’s Wilderness Lodge (which opened in 1994 and added its first Disney Vacation Club property in 2000). The new, meticulously detailed development adds another dimension to the expanded resort’s richly layered backstory.

The sleekly designed Copper Creek Villas & Cabins represent life today in the majestic Pacific Northwest, where communities turned relics of an abandoned Transcontinental Railroad (a pioneering transportation system that enabled the region’s development but was later replaced by cars and planes) into welcoming spaces for new generations of travelers.

The new Disney Vacation Club Resort celebrates this story of reinvention through a variety of new and re-imagined spaces that draw inspiration from those resourceful Westerners. We were excited to be among the first to enjoy a look and are pleased to now share five of our favorite discoveries:

This re-imagined pool area gives the appearance of a repurposed abandoned rock quarry. Salvaged mining equipment at the heart of the cove and an aging Boulder Ridge Railway and Mining Co., water tower nearby are among the rusty reminders of the area’s “rocky” history.

Geyser Point Bar & Grill at Disney’s Wilderness Lodge turns what appears to be a former railroad depot into one of the most restful retreats anywhere at Walt Disney World® Resort. The casual space, which shares its shore with the nearby Fire Rock Geyser, serves satisfying flavors of the Pacific Northwest – including specialty cocktails handcrafted with ingredients from Pacific Northwest distilleries – and stunning views of Bay Lake. Explore the surrounding area, and you’ll even find evidence of the abandoned railroad track still visible near the adjacent Reunion Station.

Included in the Villas’ décor are clever nods to Disney’s own connections to the Pacific Northwest and the rugged rails. This décor includes artwork inspired by the 2003 Walt Disney Animation Studios film Brother Bear, which, like Disney’s Wilderness Lodge, was created in Florida but set in the Pacific Northwest. A framed Carolwood Pacific Railroad pass pays homage to the miniature railroad that famously carried friends and family through the backyard of Walt Disney’s California home. And, of course, the Villas offer their share of hidden Mickeys — psst, we hear you should take a closer look at the wall covering in the Villas’ kitchen cabinets.

26 waterfront Cascade Cabins that sleep up to 8 Guests were inspired by the lakeshore homes that once housed the railway’s supervisors and site managers. The luxurious Cabins’ double-sided, stone-hearth fireplaces and screened-in, wrap-around patios with private hot tubs change the way we think about life in the wilderness — not to mention how we’d prefer to wind down with views of Bay Lake after a day at the Parks!

Interested in exploring Copper Creek Villas & Cabins for your family’s next vacation? Disney® Visa® Cardmembers get special financing on the purchase of a real estate interest, including a Member Add On, in a Disney Vacation Club Resort.1 That’s a lot of breathing room to relax, unwind and reconnect within the wonders of wilderness — just around the river bend from Magic Kingdom® Park.

Now that you’ve arrived at Disneyland® Park, the Happiest Place on Earth and maybe even in the galaxy . . . how do you squeeze the most happiness out of the day for you and your family? There‘s plenty of potential, and for Disney Visa® Cardmembers, plenty of perks and rewards! To help you enjoy […]

Every step of a Walt Disney World® Resort experience tells a story. From the moment you check in, you’re surrounded by details that turn a vacation into an unforgettable journey, and every Resort has a different theme that leads to different sights, sounds, and sensations. We’ve picked 5 of our favorite fun facts about the […]

If you’re a Disney Visa® Cardmember, we’re sure you’ve discovered how the year-round perks the card offers not only benefited you, but also brought joy to the Disney fans in your family. We’ve gathered a few stories that fellow Cardmembers’ have shared with us of how they’ve used their perks to create one-of-a–kind memories, in […]

Cardmembers save with special vacation financing.1